I wake Frank up with "I want pancakes for breakfast!" The nausea is finally gone. I'm alive! Still a little weak from the 17 pounds I've lost. I manage one pancake and a little scrambled egg. It actually tastes good! No more jello! Go slow--don't rush it!

By noon I feel good enough to go shopping with Chris for a card and gifts for Tayler Rae. We're gone an hour. I'm tired when we get home.

Gary, Maria, Junior and Joseph have arrived. They brought tri-tip roast and fresh strawberries and a birthday cake for Chris. Gift clothes they give Chris Don't fit so we go shopping again for 2 hours. Feels great to be out and about. I have no pain at all.

Gary and Maria and Chris and Ric are talking about when and where to get married and about babies they want. I have alot to look forward to.

We have a grand and glorious day! Friends from square dance bring me a plant from the club.

Mom and Frank were supposed to visit me in Sonoma County on my birthday April 9. Instead mom was checking herself into the hospital that day. 11 days later I was visiting her after her cancer diagnosis. That was sweet of my brother Gary and his wife Maria to bring a belated birthday cake. Gary and Maria did get married the following year in June 1992 and Ric and I got married a week later on June 15. Besides her beloved grandson Justin, mom did get one more grandchild before she died. Derek was 10 months old when she died, so he never got the chance to know her. His brother Ryan was born two years later and Gary and Maria's twin boys Austin and Robert were born in 1996.
Posted by Christine Lucky Reyes at 8:22 PM

Christine Lucky Reyes
Windsor, California, United States
I begin this blog at the age of 56, the same age mom was when she found out she had cancer. Thank you Mom for all you taught me, and for all you are continuing to teach me through your journal. Thank you for loving me unconditionally and supporting me through every storm. I love you and I miss you very much. 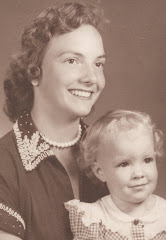